Debra Magpie Earling is the author of Perma Red and The Lost Journals of Sacajewea. An earlier version of the latter, written in verse, was produced as an artist book during the bicentennial of the Lewis and Clark expedition. She received the Mountains and Plains Best First Novel Award, the Western Writer’s Association Spur Award for best first novel and the Award for best novel of the year, and is the winner of the American Book Award.

She has received both a National Endowment for the Arts grant and a Guggenheim Fellowship. She retired from the University of Montana where she was named professor emeritus in 2021. She is Bitterroot Salish. 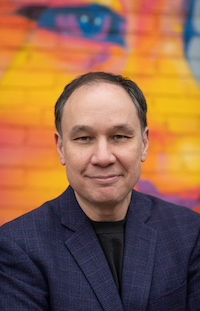 Jamie Ford is the great-grandson of Nevada mining pioneer, Min Chung, who emigrated from Hoiping, China to San Francisco in 1865, where he adopted the western name “Ford,” thus confusing countless generations.

His debut novel, Hotel on the Corner of Bitter and Sweet, spent two years on the New York Times bestseller list and went on to win the 2010 Asian/Pacific American Award for Literature.

Jamie’s latest novel, The Many Daughters of Afong Moy, was published August 2022 by Simon & Schuster.

His work has been translated into 35 languages. (He’s still holding out for Klingon, because that’s when you know you’ve made it).

Sean Hill is the author of two poetry collections, Dangerous Goods, awarded the Minnesota Book Award in Poetry, and Blood Ties & Brown Liquor, named one of the Ten Books All Georgians Should Read in 2015 by the Georgia Center for the Book. He’s received numerous awards including fellowships from Cave Canem, the Region 2 Arts Council, the Bush Foundation, Minnesota State Arts Board, The Jerome Foundation, The MacDowell Colony, the University of Wisconsin, a Stegner Fellowship from Stanford University, and a Creative Writing Fellowship from the National Endowment for the Arts.

Hill’s poems and essays have appeared in Callaloo, Harvard Review, New England Review, Orion, Oxford American, Poetry, Tin House, and numerous other journals, and in over a dozen anthologies including Black Nature and Villanelles.

He has served as the director of the Minnesota Northwoods Writers Conference at Bemidji State University since 2012, and is a consulting editor at Broadsided Press. He has taught at several universities, including at the University of Alaska – Fairbanks and Georgia Southern University as an Assistant Professor. Hill lives in Montana where he is the Visiting Professor of Creative Writing at the University of Montana. 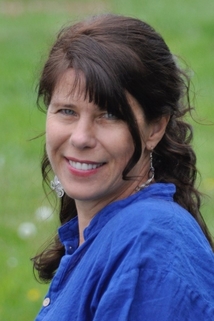 Laura Pritchett is an American author whose work is rooted in the natural world. She began her writing journey with the short story collection Hell’s Bottom, Colorado, which won the PEN USA Award for Fiction and the Milkweed National Fiction Prize. This was followed by the novels Sky Bridge, Stars Go Blue, Red Lightning, and The Blue Hour, which garnered numerous literary awards, including the High Plains Book Award and the WILLA.

Laura’s work has appeared in The New York Times, O Magazine, Salon, High Country News, The Sun, Orion, Pinch, High Desert Journal, Lit Hub, Publisher’s Weekly, The Normal School, Writers on the Range, OnEarth, Brain, Teen, and many others. She has been recognized by several organizations for environmental stewardship. She holds a PhD from Purdue University and teaches at various writing conferences around the country. When not writing or teaching, she can generally be found outside in Colorado’s mountains.

Sean Singer is the author of Discography (Yale University Press, 2002), winner of the Yale Series of Younger Poets Prize, selected by W.S. Merwin, and the Norma Farber First Book Award from the Poetry Society of America; Honey & Smoke (Eyewear Publishing, 2015); and Today in the Taxi (Tupelo Press, 2022). He runs a manuscript consultation service at seansingerpoetry.com.

J. Drew Lanham is a Clemson University Master Teacher, Alumni Distinguished Professor, and Provost’s Professor in the Department of Forestry and Environmental Conservation. A faculty member since 1995, Drew is an internationally respected conservation and cultural ornithologist. He is a past board member of several organizations including the National Audubon Society, Aldo Leopold Foundation, the American Birding Association, and BirdNote. He is also the former chairperson of the advisory board for Audubon South Carolina and was a twelve-year member of the South Carolina Wildlife Federation.

Drew is a widely published author and poet focusing on a passion for place and the personal and societal conflicts that sometimes put conservation and culture at odds. Drew was named the poet laureate for his home place county of Edgefield, South Carolina in 2018 and is the author of Sparrow Envy- Poems.

His award-winning book, The Home Place: Memoirs of a Colored Man’s Love Affair with Nature exemplifies his passion to define environmental sustainability and conservation in new ways by bridging the gaps between advocacy, education, inspiration, and conservation.

His essay, “Forever Gone,” a lyrical treatise on extinction, was chosen as a Best American Essay of 2018. A contributing author to numerous periodicals and anthologies, he has been summer faculty at the Bread Loaf Environmental Writing Workshop and the Writing in the Ruins Workshop. As a Black American, he’s intrigued with how ethnic prisms bend perceptions of nature and its care.

CMarie Fuhrman is the author of Camped Beneath the Dam: Poems (Floodgate 2020) and co-editor of Native Voices: Indigenous Poetry, Craft, and Conversations (Tupelo 2019). She has forthcoming or published poetry and nonfiction in multiple journals including Emergence Magazine, Platform Review, Yellow Medicine Review, Cutthroat a Journal of the Arts, Whitefish Review, Poetry Northwest, as well as several anthologies. CMarie is a regular columnist for the Inlander, translations editor for Broadsided Press, and nonfiction editor for High Desert Journal and Upstreet. She is the Director of Poetry and is on the Nature Writing faculty at Western Colorado University. She is the 2021-2023 Idaho Writer in Residence, and resides in the mountains of west-central Idaho. 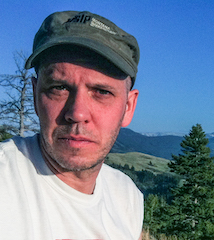 Workshop staffer Marc Beaudin is a former Absaroka-Beartooth Wilderness Foundation artist-in-residence, a poet, theatre artist and co-owner of Elk River Books in Livingston, Montana. He is the author of Life List: Poems (named a 2020 Honor Book Winner by the Montana Book Award), the hitchhiking memoir, Vagabond Song: Neo-Haibun from the Peregrine Journals, and the album From Coltrane to Coal Train: An Eco-Jazz Suite. His work has appeared in numerous journals, and has been widely anthologized in publications dedicated to environmental and social justice. A frequent performer of poetry and spoken word, Beaudin has worked and recorded with a variety of musicians at venues across the country, including Billy Conway and Dana Colley (of Morphine), Bill Payne (of Little Feat), The Northwoods Improvisers and the Big Sky Jazz Trio. Despite all available evidence, he believes the Brahms’ Violin Concerto in D is more powerful than all the guns, smokestacks and coal trains in the world.

Scott Carrier is an independent writer/radio producer who lives in Salt Lake City, Utah. His work is nonfiction, documentary, personal essays covering America as a civilization in decline: wars, refugees, the cultural divide, environmental extinctions and disasters. Sometimes he writes about sports and food and music. His radio stories have been broadcast by This American Life and The New Yorker Radio Hour. His print stories and photographs have been published by Harper’s, Esquire, Mother Jones, and The Rolling Stone magazines. He’s published two books, both collections of essays. He has a podcast, Home of the Brave, but it’s currently not in production due to the pandemic and the uncertain state of affairs in the world. Carrier is now working on building a house in the desert of southern Utah.

Jesse Logan has a Ph.D. in ecology and is an internationally recognized authority on whitebark pine and the ecosystem supported by this keystone species. He was on the faculty of the Natural Resource Ecology Laboratory at Colorado State University, and he was a tenured associate professor at Virginia Tech in the forestry and entomology departments. He worked as a research entomologist for the U.S. Forest Service’s Rocky Mountain Research Station. Since retiring in 2006, Logan has continued research and advocacy for high-elevation ecosystems of the Greater Yellowstone Ecosystem. He is a Certified Interpretive Guide, a Leave No Trace instructor, and a Certified Yellowstone Association Naturalist. In the summers, he works as a contract instructor for Yellowstone Forever, and during the winters he works as a backcountry ski guide working out of Cooke City for Yellowstone Ski Tours and Beartooth Powder Guides.

As a journalist, workshop staffer Andrea Peacock has covered Montana politics and Western environmental news for alternative newsweeklies across the West, as well as Mother Jones, Amicus Journal, Counterpunch and High Country News. A former editor of the Missoula Independent, she received an Alicia Patterson Fellowship for her work on a project about the ways oil and gas development affects communities in the West. She is the author of Libby, Montana: Asbestos and the Deadly Silence of an American Corporation (finalist for the Mountains & Plains Bookseller Reading the West 2004 award in nonfiction) and the co-author of The Essential Grizzly: The Mingled Fates of Men and Bears (winner of Foreword Magazine’s 2006 Gold Award for Nature Book of the Year), with her husband Doug. She is the co-owner of Elk River Books in Livingston, Montana, and treasurer/co-founder of Elk River Arts & Lectures. 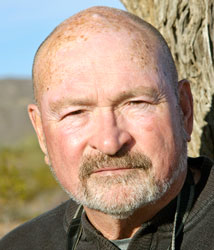 Doug Peacock is the author of Grizzly Years, ¡Baja!, Walking It Off: A Veteran’s Chronicle of War and Wilderness, and co-author of The Essential Grizzly: The Mingled Fates of Men and Bears. A Vietnam veteran and former Green Beret medic, Doug has published widely on wilderness issues ranging from grizzly bears to buffalo, from the Sonoran desert to the fjords of British Columbia, from the tigers of Siberia to the blue sheep of Nepal. A friend of the late author Edward Abbey, Doug was the model for Abbey’s infamous character, George Washington Hayduke. Doug received a 2022 Award in Literature from the American Academy of Arts and Letters for his most recent book, Was It Worth It: A Wilderness Warrior’s Long Trail Home. He was named a 2007 Guggenheim Fellow and a 2011 Lannan Fellow for his work In the Shadow of the Sabertooth: Global Warming, the Origins of the First Americans and the Terrible Beasts of the Pleistocene, for which he received a High Plains Book Award. He was the co-founder of Round River Conservation Studies and Save the Yellowstone Grizzly.